After we left Boron, California, we zipped (as if you can call it that in the bus) North on Hwy 99 to a campground in Tulare.  We decided to take a day trip into Sequoia National Park, the weather was beautiful and we were excited about getting to see some giant trees.  We left our campground a little later than we had hoped, so we knew it would be basically a drive through experience with only a little while to actually explore on foot.  We stopped at the ranger station after we entered the park and set out with a game plan to walk around the General Sherman and General Grant trees for sure.  We started climbing in elevation through the park and had to stop for about 20 minutes at a road construction site.  Chas and the girls worked on their Jr. Ranger workbooks, the view from where we were stopped was amazing so it made for a nice stop. 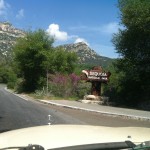 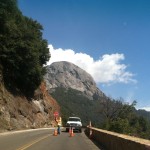 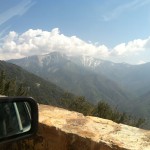 If you are going to be stuck for a little while at a road construction stop, why now have a view like this.

Working on Jr. Ranger books while stopped for road construction.

We drove to the upper parking lot for the General Sherman Tree Trail, which turned out to be a much longer hike than I expected.  The trail is excellent, but you will be winded after you make it back to your car.  This trail takes you by several of the giants on your way to see the Sherman tree, my favorite was the twin trees where we were able to touch a giant for the first time.  Many of the trees are fenced off so you can’t get close enough to touch them, but a portion of the trail goes right between these trees.  I was surprised to discover the bark is very soft and spongy, not hard like almost all trees I have encountered.  It is so soft, I could see it being very easy to take a nap with a Sequoia as a backrest and pillow.  The General Sherman Tree is the largest tree, by wood volume in the trunk, in the world. 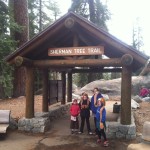 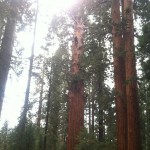 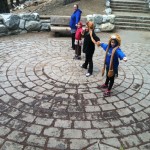 General Sherman Tree trunk outline in the bricks of the trail, the girls would be standing at the middle of the tree and Chas at the far edge. 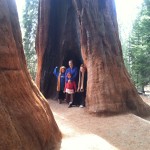 Our first experience being able to touch the giants 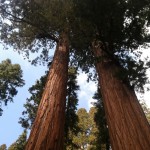 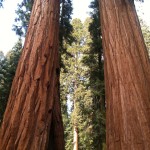 Scientists think these were probably joined as one tree many years ago, but the weight of the trees slowly pulls them apart. 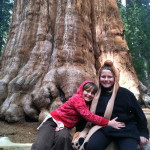 After leaving the General Sherman Tree, we drove into Kings Canyon Park and went to the General Grant Tree.  On our way up the trail, we found the Tunnel Log that you can walk through and explore.  I am 6’5″ tall, and did not have to lower my head all the way through the log.  We hiked around the General Grant tree, I was amazed by the size of the fire scar on the upper side of the tree.  There is a photograph of soldiers in the 1800’s standing at the fire scar, and it looks the same as it did over a hundred years ago.  The General Grant Tree is the 3rd largest tree by wood volume in the world.

Some fun facts about the tree: 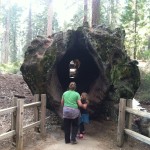 The Tunnel Log on the General Grant Tree Trail 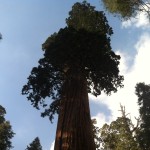 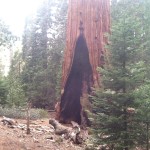 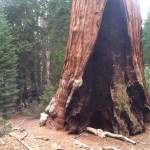 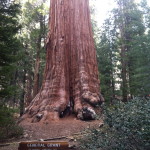 We enjoyed our drive through the giant trees, seeing trees that large is a very awe inspiring experience.  I could not imagine how the early explorers felt when they experienced these trees for the first time.  The video and pictures we took while in the park do not really express how large these trees are, you just have to see them in person to really appreciate them.