We left our summer home in the Mt Hood National Forrest the first week in September.  I had been asked to get to the Sugar Beet Harvest as soon as we could so I could get settled in to my new Night Shift Foreman position at the Hillsboro, ND, beet piling yard.  We thought we would have a few weeks to get from Oregon to North Dakota, but that quickly changed to ASAP.  We had to cut our adventures short to get there in a timely fashion, but we still had time to do plenty of exploration on our way East. Driving across Idaho, we came upon a newer roadside attraction, The Crystal Gold Mine, and were very glad we stopped.  It is just off of I-90 in Kellogg, Idaho, and well worth your time.  They have plenty of parking for big rigs like ours, so don’t be worried about parking space.  They also offer a campground, but we didn’t have time to stay with Glacier on our minds.

We had no idea what to expect when we stopped, we just noticed the sign that said they offered underground mine tours and decided to see what it was all about.  The mine was actively mined in the 1880’s, but had been sealed off and lost in the mountain until it was rediscovered in 1991.  Left untouched by human hands for that long, it had begun to develop as a cave would over the centuries with new crystal formations growing for over 100 years.  It was decided it would be a great educational mine, and it does not disappoint.  You can even touch some large gold nuggets that are still embedded in the walls of the mine. Gold Nugget in the wall of the mine It is amazing to walk down under a mountain, knowing the miners used candle light to do their work.  The methods they used to create the mine allows it to not require supporting of any kind, they followed the quartz seam as it dropped through the mountain.  It is believed that they sealed the mine and left its location secret so they could come back with more equipment or workers.  For some reason that is lost to history, they never returned.  The mine still has very rich gold deposits, but the new owner could see the benefit of using it as an educational mine for generations to come.

After the underground tour, we did a little gold panning to see what we could find.  The girls had fun splashing in the water, but they still had panning experience from our time in California in the American River.  It wasn’t as intriguing for them as it might be for kids that have not done it before. We were at the mine for a couple of hours, then it was time to get back on the road.  Our sights were set on Glacier National Park by the next day so we had some miles to put behind us.  The bus was slow going over some of the mountain passes (14 mph at one point for several miles) but we made it.  We even saw a Moose on our way to Glacier that evening.

This evening started out like many others this summer in The Hood…  I had left the campground on my rounds through our other campground we were responsible for just 2 miles up the road.  It was a busy night, so I had a bunch of campers to check in and the bathrooms were a wreck so I had some last minute cleaning and TP supplying to take care of.  The sun was going down, so it was starting to get dark when some familiar headlights came flying through the campground.  Seeing Chas pull up in our car so fast without the girls in the car made my heart sink since I knew something had to be wrong.  She told me Lydia had a really bad splinter in her toe and I had to come home to help her.

Since I am the family medical provider when it comes to cuts, gashes, splinters, burns, and any other trauma for that matter, I expected a routine splinter removal.  When I got back to the bus I was not prepared for what I saw in her poor little bloody toe.  I had been telling them all summer that running around barefooted and/or wearing flip-flops were a recipe for disaster, but nobody seemed to listen to my words of wisdom.  Lydia was running around behind our canopy to hide because she thought I was coming back home and they wanted to surprise me.  Wearing flip-flops, she kicked the end of a 2″ diameter stick and it lodged a large chunk of itself under her toenail.  I have had small splinters under a nail, and they do not feel good at all.  I could not imagine what this one felt like in the least.  Knowing the ER was an hour drive away, and it was too late for the Urgent Care to be open, I gave her the option of me removing it.

After some debating of options, she decided to let me remove it.  I had to use the small scissors out of my tackle box to cut away the nail since I knew it would fall into a million pieces if I tried to pull it out.  It was so thick, it actually ripped the nail up from the nail bed, the pressure had to be intense for sure.  After cutting the nail away on both sides of the splinter, the pressure was reduced enough to get the largest chunk out.  Then I cut the rest of the nail away and flushed it out with some of our peroxide based contact solution (we use that stuff for everything).  She said it felt so much better after I had it removed the pressure was causing the majority of the pain.  We wrapped it up and took care of it, and she healed faster than I expected (leave it to kids).  Now for the photos, brace yourself…  I have come to accept the fact that bare-footed kids toes are always dirty, you should accept that too 🙂

The picture doesn’t do it justice Lydia was a real trooper during the surgery, with no anesthetic to be had.  She was very thankful when it was over, and so was I.  I am still not sure who had the most traumatic experience, me or her…  That night she promised to always wear shoes whenever I told her it was a good idea and that she would get rid of her flip-flops…  That didn’t last as long as I had hoped, the flops are still in the every day shoe pile…

While at the Saxon Air Force Museum in Boron, California, we met an awesome couple whose names escape me since it was over a month ago.  We began talking, and I mentioned I would love a tour of Edwards Air Force Base.  We were told that public tours were no longer offered since 9/11, and the on-base museum was closed and collecting dust.  I must have given a disappointed look, because he offered to give us a private tour of the base.  My eyes lit up like a Christmas Tree, and Lydia decided she would go with me early the next morning.

We arrived the next morning looking forward to seeing some history making aircraft, and facilities that are very important to our National Defense system.  We were filled with information on the ride from Boron to the entrance of the base, we drove for miles along the border of the base and Lydia wondered if we would ever get there.  We made it through the security checkpoint without a hitch (not that I was expecting a problem) and drove over to some of the first aircraft we were able to see on display outside the NASA buildings. 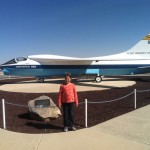 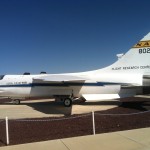 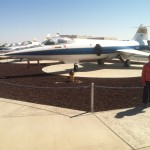 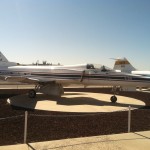 We walked around these planes, Lydia was surprised how large they were in person, she would be in for a big surprise when we got closer to some a few minutes later.  We drove from the NASA buildings over to the Chuck Yeager Memorial, and Lydia posed for a picture.  He might have made a good grouchy Hobbit based on his size and a description of his personality.  We drove from the memorial to the Machine Shop, where I had to take a picture of Lydia with a Hyster Forklift since I spent 7 years designing special options for these exact pieces of machinery.  I wish I could have taken pictures in the repair hanger where a row of B-52’s were lined up along with several other aircraft.  We were able to walk through the tire supply area and see tires up close for all types of aircraft.  When we left the machine shop, we drove to the other end of the base where we were able to see the remains of the Extended High Speed Test Tracks. 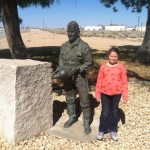 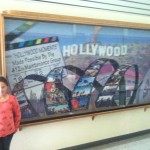 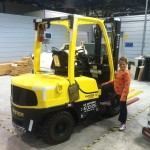 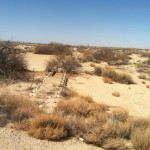 We drove around the base to see the X-1 Loading Pit, this is where the X-1 plane was loaded onto the belly of the larger plane that dropped it.  The X-1, piloted by Chuck Yeager, was the first plane to break the sound barrier.  There are plans to fill this pit in so there will be a little more concrete in the parking lot, it is a shame pieces of history like this are not thought of as important anymore.  We drove around to another facility where I couldn’t take pictures and walked around several large planes and saw where they did fire training on the base.  Then we made it to the outside of the museum on the base where there were several other planes on display outside.  My favorite has always been the SR-71 blackbird, it never gets old walking up to one of the amazing machines.  Once our guide told me what the ICBM was (I had no idea what one looked like up close), it made chills run down my spine.  It is hard to believe that these devices could cause so much destruction..  In the background of the shots that show the dry lake bed runway and a large portion of the base, you can see a large black structure.  This was the MDD (Mate De-Mate Device) that allowed the Space Shuttles to be mounted on the back of a jumbo jet so it could be flown back to Florida.  This, literally HUGE, piece of history is probably going to be scrapped in the near future since they don’t want to donate it to a museum. 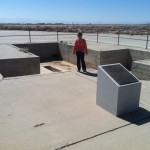 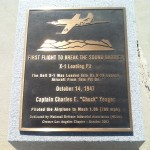 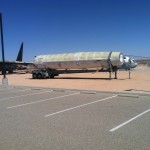 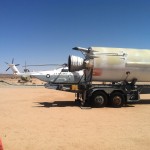 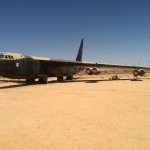 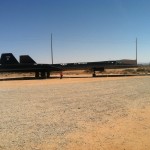 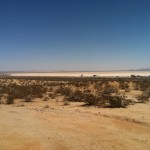 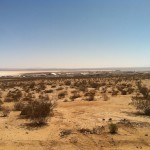 We are very thankful for the opportunity to go on this tour, and will remember it for sure.  I just wish I could remember the name of the gentleman that gave us the tour, maybe someone will fill me in.  Please let me know if I made any mistakes with the information included in this post so I can make corrections.