While in San Francisco this spring, we drove across the Golden Gate Bridge and ventured out to a hidden cove known as Muir Beach.  This area had some of the most impressive tide pool sea life I have ever seen.  The video includes some under-water shots taken with my iPhone thanks to my water proof case.  The colors of the anemone were so vibrant, they looked like they were glowing in the sunlight.  Chas and the kids had to have a hooping party on a beach just south of our RV Park in Pacifica, CA. 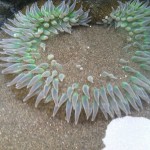 My shadow with my hat is reflecting in the water. 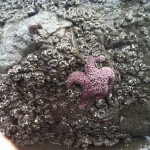 Our trip across the Golden Gate is un-eventful, and we didn’t get to position ourselves for impressive photos.  If you have never been in person, it may be worth checking out.  You can see Alcatraz Island from the bridge, and the view of the city with fog rolling in was amazing.  The first part of the video is driving across in our Blondie car, the second is driving across in the bus, towing Blondie on our trailer. 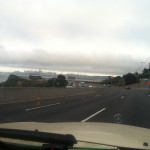 Lombard Street is known as one of the most curvy roads in the world, they never would have been able to complete the street without the switchbacks that make it famous.  I am lucky the curvy section is just a few hundred yards long, or I would be getting puked on from the passenger seat.

The streets in San Francisco are very steep in sections, as you can see in this video, but this would have been crazy if it were a straight road.  I can’t imagine what it would be like to live on that section of the street with tourists constantly walking and driving down it.

I would like to get approval to take the bus down it, but I don’t think that would happen.  I think I could do it though… I love to feel the flow that Hula Hooping brings my body.  The girls and even Jody enjoy giving the hoop a spin as well.  I don’t have many pictures of myself hooping because I am usually the photographer for our Captured Moments. I mainly have pictures of the homemade hoops hanging around(like the one of it laying on the wagon with Emmie at the beach and on the front of the bus). Lydia captured the pics of me and her sisters.

When deciding in scaling down on possessions prior to moving into the Bus, there was no question of whether the hoops would make the cut, only the question of where to store them.   They have found a home strapped to the side of the bus because space inside is precious and it is cool to show them off as we drive down the road.  We made a few different sizes out of black water-pipe line and duck tape.  If you have never tried to hula hoop or if it has been a really long time, keep in mind the bigger the hoop- the easier it is to keep it spinning.  So……if you meet us along the road we would love to share our hoops with you and let you try giving them a whirl…….